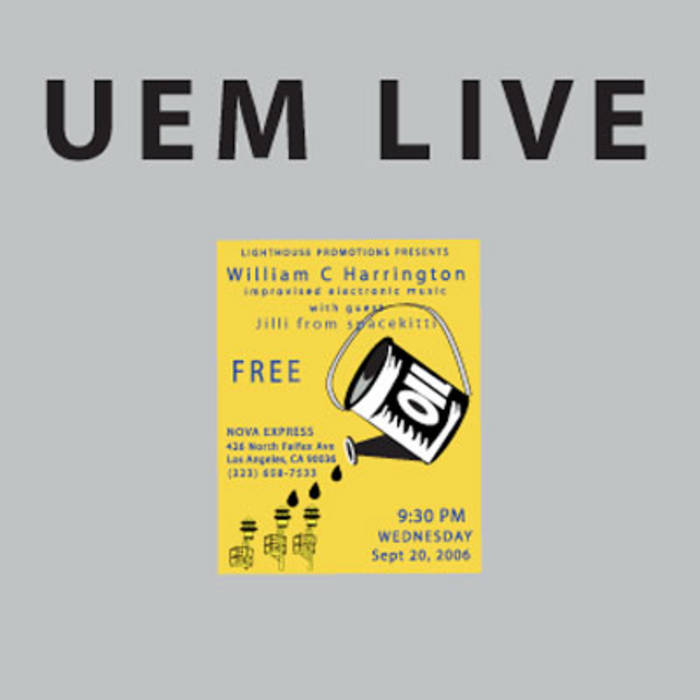 Recorded live (one take, no overdubs or edits) at Nova Express - September, 2006. A 2 track analog recording! (We were still using a Sony TCD5M cassette recorder). Jilli really showed her stuff on this recording. Despite not having any formal musical training, she coaxed incredible sounds out of her guitar using a slide, bow, discarded cell phones, ticking watch, riding crop, and numerous pedals.

About the cover. The poster for the show at first appears to be a watering can, watering flowers - but on closer inspection is actually an oil can. The "flowers", air raid sirens - the type (still visible) installed all around LA in the 50s to warn of a nuclear attack. And thus we show the seeds of our own destruction.

Kick ass experimental analog loops, drones and collage for fans of Eno, NON, Reich, Cage, electronic music (by its traditional definition), even tribal King Crimson. Recorded live, this is really one long track split into many tracks with distinct flavors and themes. Well done. My picks:
2, 7, 8.

7) a lovely drone starts this and evolves nicely, staying chill and narcotic until end where moog tones appear

8) an eastern tabla flavor to this, cool

9) a little more electronic but incorporates some treated guitar

10) developing a definite rhythm, tribal but not trite, still on a foundation of excellent drony noise

12) brief, dominated by feedback and a square wave

13) guitar feedback symphony again, like in intro reminds me of tones The Residents used a lot in their early days ("on any other street"), midway loops like crashing and falling appear, at end theres some backward voice sample

"...this 14 track live recording of UEM's performance at Nova Express, in LA, in Sept 2006 with special guest Jilli Dart of spacekitti features Harrington on soprano sax and electronics and Jilli on guitar, sitar and effects and travels the corridors of improvised experimental/electronic, spacing from drones to noise, occasionally pointing in the direction of more rhythmically-defined patterns and flirting with some weird free-form of obscure guitar-impregnated idm. Keep an eye on UEM as I feel they'll have more in store for us pretty soon".
- Marc Urselli-Schaerer, Chain D.L.K.

"The recording is wonderful! I hope to hear from UEM again soon."
- DaveX WDBX, 91.1 FM Southern Illinois, It's too Damn Early

DaveX aired "UEM Live" in it's entirety 10.21.06 on
WDBX 91.1 FM Southern Illinois, It's Too Damn Early, a weekly experimental show


"Heard the whole CD this afternoon and totally enjoyed it. Nice choice of edits and the mix of sounds is wonderful. Airplay coming."
- Don Campau KKUP, 91.5 San Francisco Bay Area, No Pigeonholes